When I was 12 years old I wanted a cream-coloured pony.

In fact, the first horse I ever begged my mother to buy for me was a palomino named Cloud. He was the most beautiful pony I’d ever seen, with his flaxen mane and tail and rich golden coat, and though he also had the bumpiest and thus most uncomfortable trot to sit to he was still, in my pre-teen mind, the most perfect pony I could possibly imagine.

Like many horse-crazy city girls, I dreamt of bringing my favourite pony home, in my case to our 1920s bricks and mortar semi-detached house in North London.

I had it all planned out. The tool shed located on the edge of the carport and which barely held a wheel barrow and a few garden tools, would be his stall. The fact that it was too small was of no consequence. Somehow I would just make it work.

Grazing was a bit of an issue, as our little pie-shaped garden had only a small patch of grass that the dogs actually used for … you know … but this didn’t seem to matter either. Within five minutes walking distance of our house was a lovely big park. In my free imagination I would take him there where he could eat grass all day long under my careful supervision. (Not surprisingly school never seemed to interfere with my dream.) Then I would ride him around the perimeter of this large park named after a king, jumping the occasional bench or playground apparatus, and pole bending around the lines of ancient elms and oaks.

Then Cloud and I would walk the short distance home, along the main road and down the broken path to our street, and I’d put him comfortably away in his makeshift stall with a yummy meal of … well, I never actually got that far in my imaginary plan. It was enough just to know he was there and we were together.

Well, sadly, life with Cloud remained a figment of my imagination that faded with time. It was a sad day when he traveled down the lane in a horse box to his new home. I got over it, of course, but you know, girls and their dreams. They never really forget them … they just get stored away.

So, fast forward to this past March (um … many, many years later …. truthfully decades) when, to my total glee this lovely palomino boy arrived at our barn for a short-term stay. The little girl in me, complete with the Cloud file that had been stored in memory all these years, bubbled to life. 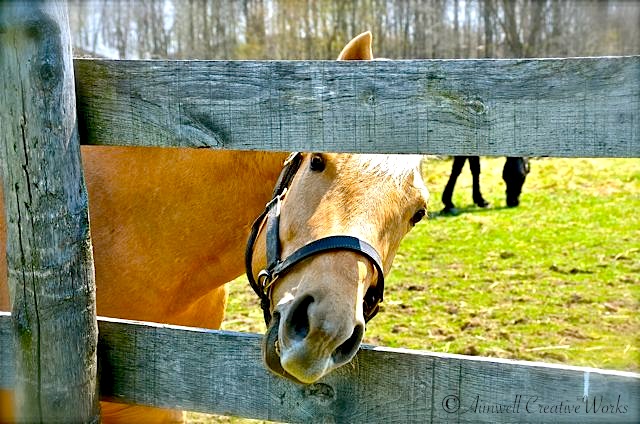 This five-year-old horse was Cloud all over again, and I was smitten.

But not without an undercurrent of guilt. Was I betraying my beautiful Bear while indulging in an old memory of the dream pony of my youth as awakened by this passing Cloud?

This may sound silly, but it’s important to note that horses do get jealous. Bear has chased his paddock buddy, Sam, away from my proximity on many occasions when I’ve visited them by the gate. He is jealous of my attention and doesn’t take kindly to interlopers.

So, yes, that I had given even a tiny speck of my heart to this dreamy, creamy phenomenon had left me feeling a little wanting, especially when I caught myself mindlessly conspiring how I might find the funds to purchase him and then convince the owner to sell him to me.

Evidently the 12-year-old is still alive and well and reeking imaginary havoc.

Then, one day, as was foretold, this golden boy moved to another barn, and with his departure my pre-occupation with an old dream dissolved into faded memory once more .

I don’t believe Bear ever caught wind of this brief flight of fancy, but who can say for sure. Horses know when they aren’t the centre of your world. I’m thinking he got his own back in July. That, however, is a story for another day.

Truth be told, I’ll keep my real-life beautiful bay over a cream-coloured pony dream any day.

Nurture what you love …

14 thoughts on “The Cream-Coloured Pony”

The Needle in a Hay Stack

"All equestrians, if they last long enough, learn that riding in whatever form is a lifelong sport and art, an endeavor that is both familiar and new every time you take the horse out of his stall or pasture." Jane Smiley

We have a WINNIE!